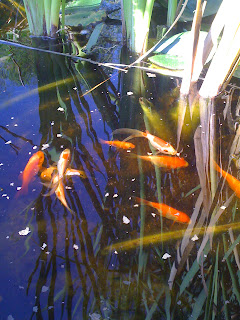 BIRDLAND IS GREENING UP. The drought is not over, we're still several inches down. We lost trees and perennials to the scorching heat. My store of carefully picked walnuts is almost gone, and the tree in my front yard is barren this year. I will have to wait until next fall to sit cracking black walnuts again for scones and muffins and pesto. But in many important ways my emotional drought is over. 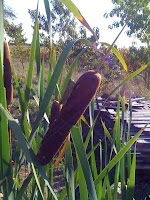 I think those 100+ degree days addled my brain. I remember my ridiculously petulant refrain, whining about the heat, the lack of green, my lack of energy, death all around. Last week I found myself in my yard paring apples and it suddenly struck me: I feel good! The modest rains brought us a sweet coolness and saved some of the plants. My tomatoes are in full bloom and I finally harvested a few of the little grape tomatoes. Even with irrigation, they didn't seem to pollinate in the high heat. Now they are trying to catch up. My cucumber vines, which in past years have filled my big crockery bowl almost endlessly until frost, have given me three squalid cukes, with a bitter taste. Though I watered, I think the ground was so dry at such depths that the poor, baked roots might have been able to grab only a few molecules of water as it ran down to the aquifer deep below. I found that the plants in my yard that did the best were in containers. At the peak of the drought I wondered if we would all have to learn to live in the desert. I envisioned container gardens in my yard, dust blowing between them. I hear it was better in town, and maybe in town the earth is more sheltered from the sun by buildings and trees. Here I found that the only green in my yard was around trees and bushes. At any rate, I'll take what I can get, and after this summer, a few cherry tomatoes to pop into my mouth seems like heaven. 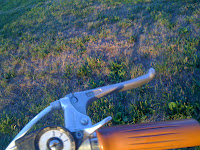 With the coolness and new semester I have newly dedicated myself to bike riding. I found a great, old bike at our thrift store in town, the Willow Tree Mission. It is a 70's era 3 speed with a wide seat for my wide fanny. It was a wreck for just $10. I took it over to Baker's Bikes in Urbana and they fixed it right up for me with new tires, new cables and all for under $50. It is certainly not fancy, but just perfect for me. 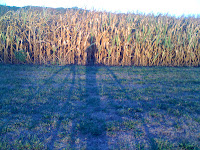 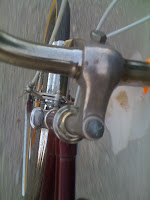 Last weekend I went to a family birthday party. Ellis needed the car, so we threw the bike in the back and my youngest and I parted ways in town. I rode from my office on campus to the party in far eastern Urbana. I figure I rode about 5 miles. On campus I used the bike path, but when those ran out I got to zig-zag through the neighborhoods on roads I never drive on. What a delight to see! People are so creative with their landscaping. I saw some wonderful front yard vegetable patches, one with rows of cabbages and peppers in front of a modest ranch house, another with a colorful fence of painted one-by-ones arranged in diamond shapes, like a row of God's eyes protecting the tomatoes. I saw a few signs of chicken-keeping too! Urbana has a reasonable policy about poultry, and I delight in seeing “farm animals” in town. We need more reminders of our connection to animals. Keeping them out of sight does nothing to encourage compassion and humanity in our relationships to animals we use for food and clothing. Seeing them reminds us of our connection.

Front yard vegetable gardening seems so wise. You get the best of all possible worlds. The work in the garden gives you fresh air and exercise. You're in the front yard, so you can visit with neighbors. You get double savings of petroleum products and carbon emissions: first by not mowing your yard, second by not paying to have the food trucked from halfway across the country or even the globe. Oh, and of course the savings on groceries, and knowing you have fresh, good food. And with a little luck, and a little more rain, the harvest might be enough to share. If we have another year like this one, front yard container gardens might be the way to go.

Garden in Beauty;
Bike in Peace;
Blessed Be.
Posted by Mary Lucille Hays at 12:51 PM No comments:

THE BEAR WENT OVER THE MOUNTAIN

ON A PARTICULAR MOUNTAIN IN VIRGINIA, THE TREES ARE MAYBE NOT SO MUCH TALLER THAN WE HAVE AT HOME, BUT STRETCHED OUT, THE LIMBS THINNER, MORE SPACE BETWEEN THEM. The canopy is higher and the understory is more airy and full of light, not full of brambles like at home. Hickory, Various Pines, Tulip Poplar, and Black Walnut grow on the hillside. Spinneys of Rhododendron and Mountain Laurel fill out the landscape. Large ferns soften the mulch-covered ground. It's damp enough here that the streams still run and mushrooms still grow, popping up in bright colors from forest floor. Big chunks of quartz, sometimes bright white, sometimes tinged with a rusty color, peek out from the soil.

We find plenty to explore on this mountain, one morning walking along the ridge until we get to the road, the winding, two lane highway that brought us here. We find bear scat and the prints of deer. Jack shows us how to tell the buck's prints from the doe's. My father-in-law is a hunter and knows these things, though we differ in opinion about whether my dog could catch a turkey if she wanted to. I sit on a boulder to enjoy the view for a moment and a slender lizard striped in bright colors slips like liquid into a crack in the rock.

Later we put on water shoes and follow the stream that runs through the valley. Ursula runs ahead, joyously rooting in the bank and scaring up birds. My dog is a water dog at heart and she is in her element here. We find a pool in a crook of the stream and sit down for a cooling soak. We skip stones and pull limbs and other debris out of the water and throw it onto the bank to decay there and add to the musky humus of the forest floor. We take the stream all the way to the property line, then take a path up the hill that circles around before heading home to a ping pong tournament and dinner. 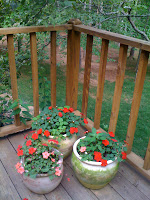 The next day we drive to a larger river and pile into three canoes, one for each generation. The river is wider than our stream, but no deeper and our boats scrape bottom pretty often. The drought is not so apparent here, but here nonetheless. The river is quiet and we enjoy the peaceful floating downstream, floating through the scenery as it unwinds with very little effort from us, just an occasional stroke to steer away from a place where ripples in the water reveal the shallows. Michael and I were in the first canoe, and at the bend of the river we came silently upon a Great Blue Heron standing like a statue until we were 15 yards away, then spread his magnificent wings and mutely lifted off to fly upstream. At another bend we came upon him again with his mate, and we followed them downriver for half an hour or so, creeping up to within a few yards before they flew. This repeated 7 or 8 times until eventually, they tired of our company and flew back upriver, the way we had all come, to be shed of our disruptions. 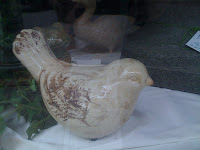 Later, up at the house, the kids found some scars on a tree—three sets of four parallel stripes cut into the bark and healed over. Did the bear leave these marks when she climbed the tree? We know the bear is in the neighborhood, because Jack saw her one day in the bottomland, chewing on a different tree. He showed us those marks, on a limb about 7 feet up. These, however, look more dramatic, and tell a different story. Is it fact or fancy? What dramas do these mountains hold?


That evening, in Floyd, we found a country store with an old fashioned candy counter. It was a blend of history with a modern, thriving arts community. On Fridays they host a Jamboree with traditional Appalachian music and clogging, the traditional dance. Sadly, we have to leave before Friday comes, but will plan the next trip to be sure we can make it for the festivities.

Posted by Mary Lucille Hays at 12:14 PM No comments: