A BIRDLAND ALL HALLOWS EVE


IN BIRDLAND WE TAKE HALLOWEEN SERIOUSLY. Halloween morning I was driving to work, and when I got up to the cemetery, I couldn't believe my eyes. A herd of goats was having a party. They looked like kids, (the four footed kind) or, maybe miniature goats, but they were grazing and gamboling between the stones. I stopped the car and tried to take some pictures with my phone, but the goats were suspicious and started jumping around and heading for the woods. I couldn't get close enough for a good shot, so I called Aunt Jane, thinking she might be able to get ahold of the neighbor whose fence they must have escaped. I told her, "The cemetery is filled with goats!"

"Well, of course it's full of ghosts," she said. "It is Halloween."


"No, goats!" I shouted. "They are gamboling amongst the stones."

"Gambling ghosts? Cards or dice?"
"Goats!” I shouted. “The kind that eat tin cans.”  I said this, although I know full well that goats don’t eat tin cans. They may nibble on the paper around the tin cans, but not the metal, itself. "Can you call the neighbors and tell them they got through the fence?" 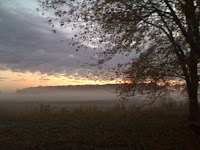 Well, we finally got it sorted out and I went on to work, but not before calling Michael. He must have been in the shower and didn’t answer his phone, so I left a detailed message asking him to take pictures for me. When he got to work he texted me. "No goats." They must have found their way home by the time he went by. 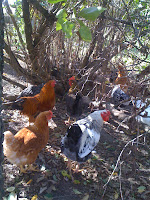 Halloween in Birdland is my favorite time. I had two pie pumpkins on my windowsill, but they have gone into the oven for pumpkin cheesecake. The big pumpkin awaits carving, and sits right outside the kitchen door. In days gone by I used to make costumes for the kids, but the kids are all grown and making their own costumes. My youngest came home and announced his intentions to trick or treat the neighbors. I was ready with the papier mache, but no. His costume, he said, would be a mustache.

"That's no costume!" I said, “It’s a disguise.”
"Yes," said Ellis. We're going as secret agents, and secret agents need a disguise." With those words, I knew it was the end of an era. No longer are my services required as maker of masks or of totally awesome swords and shields. No longer are my seamstress skills necessary. I’ll just put my sewing machine away up in the attic. No more capes or hoods or swashbuckling pantaloons. 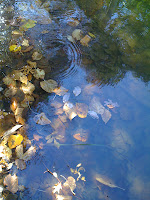 I might have argued that since No-shave November was almost upon us, a mustache was not much of a disguise, either, but they also dyed their hair. Since it was probably the last year that they can get away with knocking on doors and demanding candy, I relented, and stayed home to comfort myself with pumpkin carving.

The Pumpkin was big and round, but a little flat on one side. It spent the past several weeks silently greeting everyone who came in the kitchen door. It was a little flat on one side and that side still had a little mud caked on it, although it had kept its silent vigil through at least two rainstorms. I wiped it clean and patted its cheek, peering at it to see what kind of face it wanted. It didn’t want to be a zombie, so popular now, with stringy, orange “brains” spilling out of its mouth. I cut its cap and scooped out the seeds, putting them into a bowl to roast later. No, it just wanted a couple of triangular eyes and a lopsided, jagged smile. I found a candle and set it back outside to greet the trick or treaters. The yellow light shone bravely into the dark night.

Posted by Mary Lucille Hays at 3:43 PM No comments:

WALKING WITH THE TREES 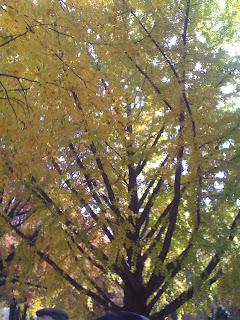 I HEARD IT WAS A "NAKED TREE WALK," BUT WE WERE BUNDLED IN GORTEX AND HEAVY WOOL AGAINST THE AUTUMN CHILL AND POSSIBLE SHOWERS. Actually it was the trees that were supposed to be naked, but only one was truly without leaves, and none of them were walking. Last Saturday I joined about 40 nature enthusiasts to stroll with Bill Vander Weit, retired City of Champaign forester, as he guided us through the urban forest of West University Avenue. Running late, as usual, I drove up to the corner of Victor and University to see a crowd converging on the sidewalk. I received a beautifully printed, green booklet with detailed descriptions and careful line drawings of each of the 45 trees we would visit. In the crowd were at least 3 News Gazette columnists and a Prairie blogger. Do we know how to PARTY or what?


Bill carried a pruning saw and would reach up into the tree to clip a sample twig to give us a close up of the leaves and sometimes the fruiting bodies, as he showed us the differences between the varieties of Maple or Oak. Sometimes these differences were subtle and I gained an appreciation for close examination of the world around me. For example, we may be acquainted with the general shape of the maple leaf. After all, it is on the Canadian flag. But that familiar red leaf is stylized, and Bill showed us how some leaves are very deeply lobed (Silver Maple) and others, like Norway Maple aren't. We are probably all familiar with the winged seeds—as kids, we called them “helicopters” but they are really called samaras—but how many of us have looked carefully enough to notice that before they fall, they are joined in pairs? I noticed later that that the shape of the pair can make a mustache if you hold it under your nose. Sandy Mason, of the UI Extension showed us one way to identify the variety of Maple through the seeds by checking to see if the two seeds were joined at a roughly straight line (a handlebar mustache) or more droopy, like Frank Zappa's mustache. 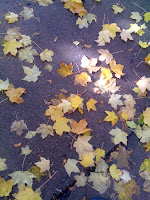 We saw some trees that were atypical—like the sassafras with only unlobed leaves. I'm used to seeing sassafras saplings in the understory, or at the edge of the woods. They are easy to recognize with their 3 varieties of leaves. Bill called these shapes the Ghost, the Mitten, and the Football. But here on the parkway, perhaps because it is not shaded by other, taller trees, this poor little tree was bereft of ghosts and mittens. Maybe because it is football season, it was showing its spirit. Bill told us about the aromatic roots (the roots of root beer) and the leaves used as filé in gumbo. I pulled one of the leaves from a low hanging branch and crumpled it to smell the fresh, lime scent. 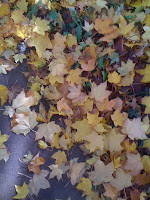 As we walked, I began to contemplate the oxymoron, “urban forest.” I'm used to thinking of a forest as a wild and unkempt place. Or rather, the wildness is the keeper of the balance in the forest. Here, though, the “forest” was well-trimmed and even planned. Bill spoke about the merits of various trees, how a particular cultivar might be problematic in certain ways. It might be prone to a divided trunk, which could easily split in high winds, or it might have drooping limbs that could interfere with traffic on a busy street. It might be messy, dropping fruit that causes a litter problem. It might be prone to escape cultivation, pushing out native species in forests that are truly wild and don't have such a watchful caretaker.


We walked on through the morning, enjoying the wind and the tree talk and the great variety in our urban forest. At one house we saw a stately ginkgo, its fan shaped leaves now a bright gold, fairly glittering in the wind. I stepped back to notice how the leaves hang off the branches almost like ferns. A few doors down one woman pointed to a stately golden tree in a backyard, the crown above the roofline. “Is that Ginkgo?” she asked. We all paused for a moment to admire the trees and the leaves, to contemplate the wisdom of caring for our urban forest.


Posted by Mary Lucille Hays at 1:26 PM No comments: