FOR JEFF, WHO SAYS THAT BIRDLAND IS "TOO HAPPY" 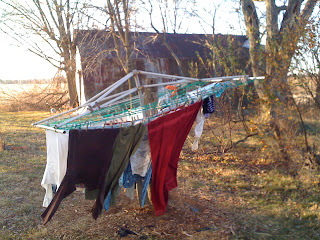 TODAY IN BIRDLAND THE SKY WAS CLOUDY AND THE YARD WAS FULL OF MUD. I knew it was going to be a difficult day when I woke up before my alarm. Now, I like to sleep in as much as anyone, but this whole “fall back” business comes on rather suddenly. The sun had already been rising later and later, and it's been hard to get up in the dark, but now the sun comes in and wakes me before I have to get up. I stood up, blinking. The first thing that happened when I got out of bed was that I tripped over Ursula. My dog likes to lie right in everyone's path, with no consideration whatsoever for anyone. She was lying right at the foot of my bed. I could have broken my neck. 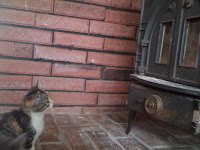 Of course as soon as I'm up she wants to eat, and Shiva joins in with the nagging. I haven't even put on my glasses yet and I'm stumbling in my robe toward the basement with the cat twining herself between my feet, and Ursula nipping at the cat, like she can hurry us all up toward the only thing she cares about: food. Ursula and Shiva act like they're starving and I can't scoop out the food fast enough to please them. I scoop food for the cat first, then Ursula. She is barking, waking the house, and blistering my eardrum. I tell her to wait, and she does. Then I go back upstairs to get the big galvanized scoop for the chicken's food which I keep on the landing shelf. You'd think that one of these days I'd remember to grab it before I go down, but every morning it's the same thing. I remember when I'm scooping the dog's food and have to go back up and then down to where I keep the chicken pellets in the basement. I scoop the pellets and then tell Ursa “okay” as I go out the door while she's wolfing down her food. I want to get outside without her because even though she's stopped chasing the chickens, she still jumps up on the coop when I open it and snaps at the closest tail feathers she can find. Just one snap, and a mouthful of feathers and one startled hen jumps out of the way. Every Dang Morning. 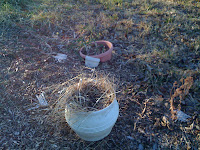 I go out with my scoop of chicken feed and open the coop. We're down to 9 hens and 2 roosters. At least the predators are getting fed. We were getting 2 or 3 eggs on most days, starting about a month ago, but this morning, like the past week, nothing. Those blamed chickens might be hiding their eggs where I'll never find them, probably in the barn. They make a beeline there every morning. I go back inside and Ursula is jumping to get out, and I let her go and turn to my morning chores. I make coffee and a smoothy for my breakfast. I pull some little slider rolls out of the freezer for sandwiches. I make them ahead, cut them in half and freeze them. That way, when I thaw them out they still taste fresh, though they might be almost a week old. But today they are stuck together, probably because I put them in the freezer while they were still warm. Wouldn't you know it? I struggle to pry the rolls open and I hear Ellis getting up. My youngest pretty much takes care of himself, does his laundry and gets himself out of bed and checks his own homework, but I still make his sandwiches most days. I've got the sandwiches out on the counter and I'm searching for tupperware to put them in, but, of course, I can't find any lids to match. Just my luck. 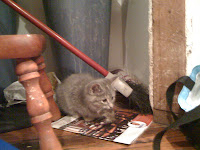 Well, you can probably guess how the rest of my morning went: Ellis missed the bus and I had to take him. AGAIN. And I left my coffee on the counter and my office keys on the dresser. I almost tripped over the cat as I was rushing to the car and there on the front walk was the worst sign of all. Half of an eggshell. That means that Ursula has found out where the hens have been laying their eggs. She brought one to the front walk and licked it clean there, just to taunt me. One more problem in Birdland. If I don't put a stop to this, I'll never get another egg.